It’s nine o’clock on a Sunday night, and I’m already considering going to bed. This is sad not only because it’s so early, but also because I did relatively little today. Morning and evening chores, and that’s about it. I suppose I also rode my bike into town for the first time, but that’s not work really.

It was, sadly enough, a challenge though. Two and a half miles to Ashfield proper, quite a bit of that is hill, and I am definitely out of shape. I’m thinking it will become a good Sunday routine: write letters all morning, ride to town and mail them, pick up some beer, eat a slice of pizza, zip down the other side of the hill at dangerous speeds. By the end of the summer perhaps I’ll be used to living in an area with actual elevation changes! 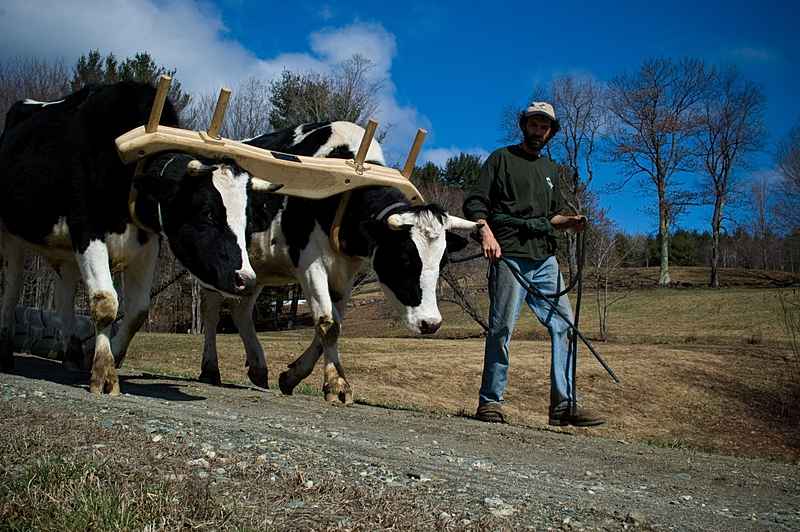 Speaking of out of shape… last week we put the boys to work for the first time this spring. By “we” I mean “Derek”, because there’s no way I’ll be driving the team anytime soon, if ever. They were especially spunky this first time out, and there was lots of yelling and wrassling and I almost had to make a call to see if my car insurance covers oxen damage. Luckily they stopped inches short of my bumper, but you quickly realize that if they don’t want to do something, such as stop or go or turn or not gore you, there’s really not much you can do about it. But they eventually got down to it and dragged an old tractor tire around, filled with rocks. They got tired pretty quick, but they’ll be whipped into shape soon enough.

We also walked the yaks last week. That was quite the hoot. It’s almost a good thing they’re so skittish and want to run away from you, because I wouldn’t want them running at me. Walking the yaks is much like walking a dog, only bigger and with horns. Once you manage to grab one in its pen, you just clip on a leash and hold on tight. They were pretty spunky too, as it was also their first time out after the long winter. After a little while they settled down and would walk by your side and heel pretty well without pulling at the leash. I wish I had photos of that, but alas, I don’t have a personal photographer around to take flattering pictures of me in my new habitat.