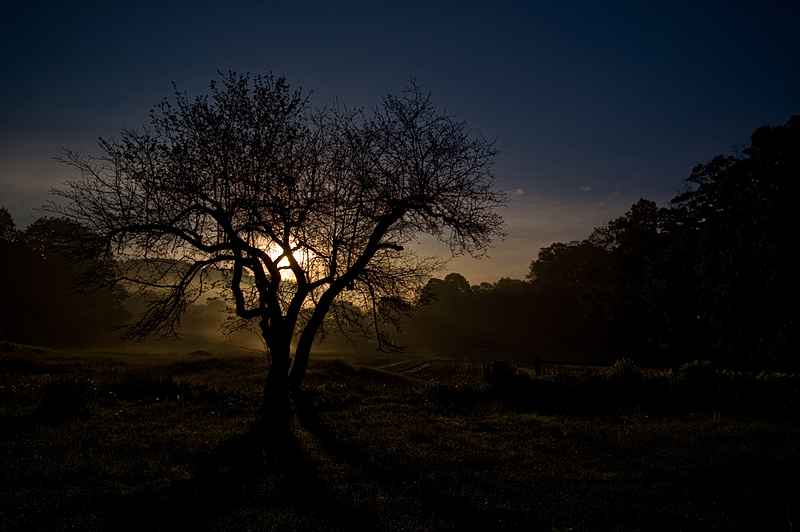 It has been rather warm and moist here lately. I woke up today (Sunday, my “day off”) at around five, with the sun peeking in the hayloft doors (which are now permanently open to ventilate the goat butt barn scent). I’m not sure what compelled me to bound out of bed and take pictures. Perhaps my lack of doing so for the past two weeks. Or perhaps because the sun had a particular hazy, diffuse quality that I knew would be gone pretty quickly.

So off I went. It was my first t-shirt-only morning… plus muck boots, dress pants, suspenders, and my camera bag. I guess I got some ok shots.

Anyways, the point of all this was that it is rather pretty here, I’ve found. Yesterday after the market I took some detours on my bike ride back. Various dirt roads deep into dark dark woods smelling slightly acidic and decayed. Some were shortcuts between more civilized roads. Some went beyond my means of locomotion, with steep descents that I didn’t feel like tackling in the opposite direction.

There were lots of hills.

It was all quiet and beautiful, with woods and cows and barns and fields and streams and gardens and an old round brick schoolhouse and a beehive on somebody’s porch roof (bearproofing, I suppose) and hills and valleys and misty bits and clotheslines and nice views and nice smells. I will have to do more exploring, at more photogenic times of day and with my camera on board. 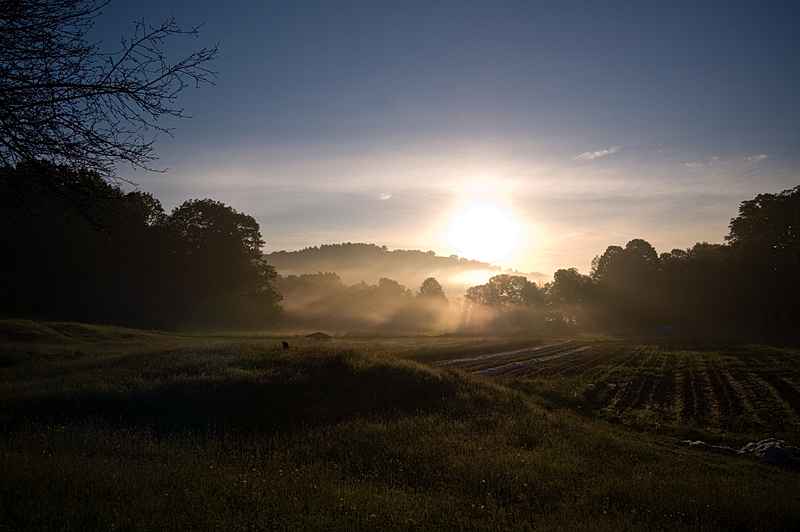 All this mist and haze is, unfortunately, because it is durn hot here. Only low nineties really, but it doesn’t feel nice. We went from steady rain and a flood warning Thursday night and Friday morning (when I got soaked through my “rain suit” while moving the sheep) to the nineties on Saturday, and through the next few days it seems. Last night was quite interesting, clear skies overhead and clouds with silent lightning off in the distance (I guess you may call it heat lightning, but it’s really just a normal storm you can’t hear due to distance or refraction of sound waves (says the internets), so let us just call it lightning, ok?).

In wildlife news, I saw a black bear a few nights ago, with two cubs close behind. They were basically at the tree line you can see in the pictures above… which is rather too close to where we have the boy sheep currently. They freaked out a bit. Doggie inspection revealed no bears in the woods shortly after I spotted them, so maybe they were just passing through for a dip in the stream (something that has crossed my mind recently).

Derek found the guinea hen’s nest, with something like twenty eggs piled up in there. A few were placed underneath the broody chicken hen in the coop, so we’ll see if anything hatches. I guess most people will remove the eggs and store them until the hen is ready to sit for a while… because they don’t start sitting until they’ve got them all out. I guess that makes sense. I’ve taken to liking the guineas, even though they’re obnoxiously loud. They don’t eat the crops and keep me from getting ticks. They can stay for now.